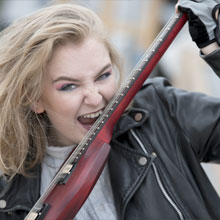 A new punk musical for the politically cynical. The show starts in a classroom in a failing school. These chicks don’t see the point of voting at all. Apathy reigns until an inspiring teacher tells them about a group of ‘posh birds’ who won the vote for women 100 years ago. But as they grasp the story they realise that the battle is still raging and they are on the front line. Suffragette? It’s not over yet!

LISTEN TO THE SONGS HERE: soundcloud.com/dougal-irvine

“Superb in every respect. If anyone’s looking to put on a musical about the Suffragettes with contemporary appeal, this is THE ONE.” The Sylvia Pankhurst Trust

“The majority of girls’ roles are stereotypical girls in love or girls who make stupid decisions… I always want to play the boys’ parts.” Cassie (18), ‘Angry Birds’ workshop cast, March 2016

Praise for Dougal Irvine’s recent hit play Memoirs of An Asian Football Casual at Leicester Curve: “it is a tour de force in its exploration of the intersections between racism, violent masculinity and Britishness” ***** Guardian